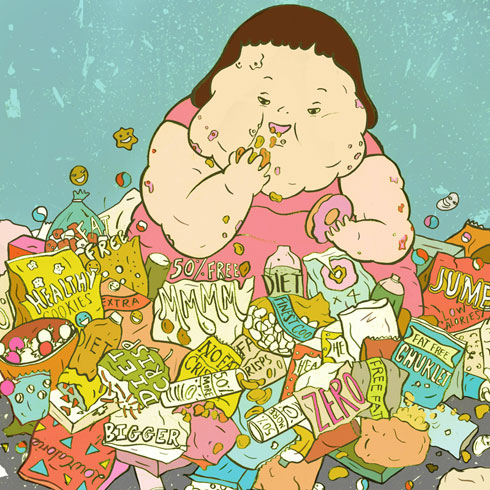 Big Food is making a big headway in the developing world, highlighting the need for researchers and policymakers to examine how the food and beverage industry markets unhealthy products implicated in chronic conditions like diabetes and heart disease.

In an interesting article, David Stuckler and al (Manufacturing Epidemics: The Role of Global Producers in Increased Consumption of Unhealthy Commodities Including Processed Foods, Alcohol, and Tobacco, June 2012; PLOS medicine – http://www.plosmedicine.org/article/info%3Adoi%2F10.1371%2Fjournal.pmed.1001235) from the University of Cambridge examined market data on processed food and soft drink sales for up to 80 countries between 1997 and 2010.

These are the key points as highlighted:

• The rate of increase in consumption of “unhealthy commodities” (soft drinks and processed foods that are high in salt, fat, and sugar, as well as tobacco and alcohol) is fastest in low- and middle-income countries (LMICs), with little or no further growth expected in high-income countries (HICs).

• The pace at which consumption is rising in LMICs is even faster than has occurred historically in HICs.

o As a result, the developing world is also set to match the First World’s unhealthy commodity consumption rates within three decades.

•  Multinational companies like PepsiCo, Netsle and Danone have now achieved a level of penetration of food markets in middle-income countries similar to what they have achieved in HICs.

• Contrary to findings from studies undertaken several decades ago, urbanization no longer seems to be a strong risk factor for greater consumption of risky commodities at the population level, with the exception of soft drinks.

• Rising income has been strongly associated with higher consumption of unhealthy commodities within countries and over time, but mainly when there are high foreign direct investment and free-trade agreements. Economic growth does not inevitably lead to higher unhealthy-commodity consumption.

o A free-trade agreement with the U.S. is associated with about a 63.4% higher level of soft drink consumption per capita for low- and middle-income countries.

o For example, Mexico experienced a rapid rise in soft drink consumption after the 1994 North American Free Trade Agreement dramatically reduced barriers for trade with the United States. As a result, the % of the Mexican population aged 15 and above who is overweighed or obese is superior to 69% (http://www.oecd-ilibrary.org/sites/factbook-2011-en/12/02/03/index.html?contentType=&itemId=/content/chapter/factbook-2011-109-en&containerItemId=/content/serial/18147364&accessItemIds=&mimeType=text/html).

o In contrast, Venezuela – which does not have a similar trade agreement with the U.S. – has maintained steady soft drink consumption rates despite high levels of economic growth.

Unfortunately, all the people in this world are not treated in the same way!

While many companies have pledged to eliminate trans fats and reduce salt, sugar and fat in foods sold in wealthy countries, these nutritional improvements are often not implemented in poorer markets.

There is a need to identify population-level social, economic and political interventions that could stem the rise of unhealthy commodity consumption, and overcome the political barriers to their implementation, as has been done for tobacco control.

It is also imperative to associate these strategies to the current initiative on food security and nutrition that was proposed during the latest G8. A focus on sustainable farming is currently a hot spot but this battle can’t have a real impact in the long term if people see “junk food” like sexy (the food that people living in developed countries love – see one of our previous blog on the same topic) or as the only affordable choice.

Their results and analysis were is part of the journal’s “Big Food” series, which is examining the influence of the food and beverage industry on public health (http://www.ploscollections.org/article/browseIssue.action?issue=info:doi/10.1371/issue.pcol.v07.i17).

As hearings begin for the 2012 Farm Bill, Washington is being urged to re-think its foreign food aid policies, procedures, and spending.

Currently, food aid coming from the USA makes up about 1/2 of the world wide total. Of this large amount of cereals, pulses, and vegetable oil 40% comes from just three large firms. As it stands today, the Farm Bill (with its $2 billion budget) is set to benefit these three companies more than the world’s hungary.

At the moment, food is purchased by USAID (US Aid for International Development) in the USA and shipped to where it is needed. This transportation accounts for 60% of the total cost of aid and takes 3-6 months to arrive at its destination. Once it has been delivered, a portion of the food is sold by aid agencies at local markets to fund their development projects in the area–this is called “monetisation”. This has cyclical consequences: not all the food goes to the hungry–> local markets are flooded with American products, which are preferred by consumers–> local growers can’t sell their produce at a fair price–> local growers become impoverished and become part of the hungry. In this way, more than 1/3 of every dollar spent on foreign food aid is wasted and benefits large corporations instead of the world’s hungry.

If the world’s hunger is to be reduced, it is essential that there is a re-evaluation of budgeting and goals. Analysis of a pilot project to buy US food aid in the country it is needed showed that purchasing some grains and pulses locally would result in a +50% cost savings and would allow the products to get to their destinations 60% (14 weeks) faster than if they were shipped from the USA. This is particularly imperative with the soon expected food emergencies, such as in Sudan where the traditional model of food aid would not be able to bring enough supplies quickly enough for the 400,000+ people already displaced by clashes. Furthermore, this would create positive cyclical consequences: locally purchased foods–> local farmers benefit by selling to US aid and being able to sell their products at a fair price at local markets–> local farmers don’t go hungry–> less food aid is needed–> greater savings in USAID dollars over time. As well, this would help decrease the USA’s giant biological footprint.

Furthermore, NGOs are pushing for more “untied” USAID dollars for more sustainable and creative ways of fighting world hunger than just providing handouts. However, strong agriculture lobbying groups will prove this to be a challenge as they have in the past. For example, a push by the Bush administration in 2005 for Congress to let USAID purchase 1/4 of the food donated locally failed.

Luckily, there has been a recent international trend which is shifting towards cash-based aid and buying from producers in developing countries. Perhaps now the times will be more favourable for a long needed paradigm shift when it comes to foreign aid.

Asma Lateef, director of the Bread for the World Institute, says USAID should also aim to meet key nutritional goals, especially for pregnant women and children under the age of two. This comes as the negative and permanent ramifications of inadequate nutrition within the first 1,000 days of a child’s existence are becoming widely recognized.

“At a minimum, we should begin to include goals on nutrition as a measure of the impact of U.S. food aid,” says Lateef. “It’s really important to have a discussion on how food aid can be better aligned with broader development goals.”